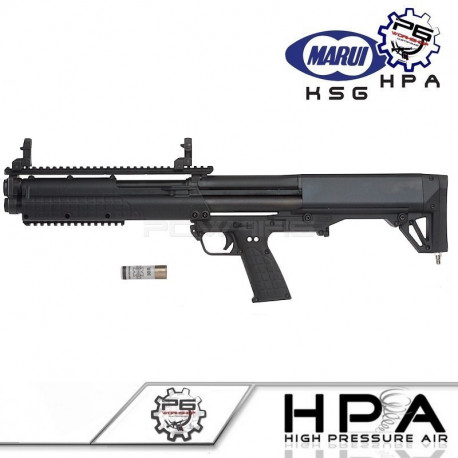 Choose your connector version EU or US before adding to cart 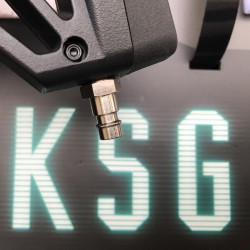 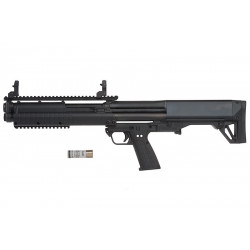 HPA conversion made in our Workshop

This product cannot be purchased separately, please contact us for any inquiries

Pump action shotguns, were invented in 1882, which made it possible to load the next shell into the chamber by moving the fore end back and forth in a pumping motion, which has become the foundation for the modern shotgun. Invented in the United States, the "KSG" is a pump-action type shotgun but it adopted the unusual bullpup style. Since the chamber is located in the back it makes the gun compact while keeping a relatively long barrel. To further its uniqueness the KSG features two tubular magazines under the barrel. Each tube holds up to a maximum of seven shells and can be fired one after another for all 14 of them. In addition, you can select which tube you would like to use whither it be left or right, this can be done by using the selector lever found at the ejection port.

Tokyo Marui are continuing with their shotgun trend that shoots between 3 to 6 BB's at a time (it's either 3 or 6, you can't choose anything in between). Going with tradition of it's older shotgun lines, this new KSG also has 3 inner barrels, each equipped with a fixed hop-up. Each shell has a capacity of 30 BBs, so you can keep shooting until the shell runs out of ammo before ejecting it. The gun holds two shells but can only load one shell at a time, and it only comes with 1 shell on purchase. Of course, additional shells are available for sale separately. The gas is stored in a removable gas cartridge stored in the stock of the gun, and additional gas tanks are also sold separately.

This shotgun was featured in the movie John Wick.

You write us by email because you wish to change delivery adress once the package delivered to the adress you set wrong, sorry but we don't make miracles sir. CS stay available for any questions. Regards