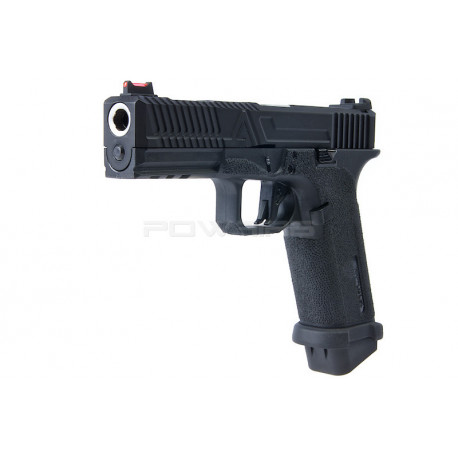 The RWA Agency Arms EXA Pistol is the first GBB Pistol that RWA has ever released under the Agency Arms & Lone Wolf Distribution license. Most notably the pistol is the same pistol used by Agency Arms Asset Paul Vandunk! At a glance, the EXA boasts Agency Arms' EXA Hybrid slide cut, mid-line fluted outer barrel, and Lone Wolf's signature Timberwolf frame custom modified to Agency specifications. Out of the box, the pistol comes pre-installed with a fiber optic front sight and blackout rear sight, allowing for a cleaner sight picture as well as the visual consistency of a standard red dot optic.

New to the RWA Agency Arms line up is the adjustable Syndicate trigger. Besides sporting the Syndicate branding, it allows you to fine-tune the trigger sensitivity and takeup, with a very short and tight pull made possible. The frame of the pistol also brings something new to the user experience, the signature Shark Scale faux stippling, and a reversible magazine catch gives ambidextrous capabilities to the magazine release. Moving the magazine release to the right of the grip for left-handed shooters is possible but requires disassembly of the pistol. Shark Scale faux stippling provides a grip that is close to real stippling, the pre-cut frame provides each user a comfortable yet secure surface to grip and control while shooting, and the included backstraps cater to shooters who are more accustomed to 1911s (slimline backstrap that comes on the gun), or XDMs and SIG pistols (additional contoured backstrap included in the box). Replacing the backstrap takes less than a minute by removing the magazine well and sliding the backstrap off the grip.

The pistol is highly responsive and each trigger pull feels solid. The trigger reset is crisp, audible, and very positive feeling, ensuring follow up shots to be incredibly accurate, making the EXA pistol a great training platform for shooting faster. The Timberwolf frame also provides a straighter grip angle as well as a higher cut beaver tail giving you a higher purchase on the gun. This translates into better recoil control for the shooter who wants the be able to move from target to target with the highest amount of speed and accuracy. It's no surprise that many real steel Glock shooters upgrade to the Timberwolf frame.

The magazine well makes reloads faster and if you prefer, you can remove it by simply tapping out the retainer pin. The full metal magazine comes with an extended bumper which in the real steel world adds 2 rounds of capacity. On this gun, it is purely aesthetic and acts as a bumper to protect the magazine during magazine drops. Sliding it forward reveals the gas charging valve.

The EXA pistol's footprint is similar to the Glock 17. Its accessory rail is standard Picatinny which allows you to mount a wide variety of lights and lasers. You will also enjoy holster compatibility as the EXA will fit holsters compatible with the Glock series of pistols (excluding 19, 19X, 42, 45). As a final touch, the inner barrel is blacked out to add realism to its fluted, midline tapered barrel which sits flush with the slide, with engravings on the ejection port that denotes the real steel caliber.

The power of gas replicas is a point of reference only, it does not constitute a guarantee of results but an estimation made by the manufacturer. Please take this information into account before purchasing, no warranty service regarding the power can be applied. The power advertised for gas replicas can be highly variable because the cooling of the tank linked to rapid fire, pressure / type of gas used and winter conditions, it is possible to empty all the gas quickly from a magazine, and if there is not enough time given to convert the liquid part into gas, the liquid form then rises through the nozzle as a white cloud. Be sure to use your equipment on suitable climatic conditions and adapt your rate of fire to the ambient temperature to avoid that effect. We recommend that you always choose the manufacturer's brand spare magazines. Choosing a different brand may generate a different power from the original as the percussion valve and magazine lips are not the same.

See all products from RWA