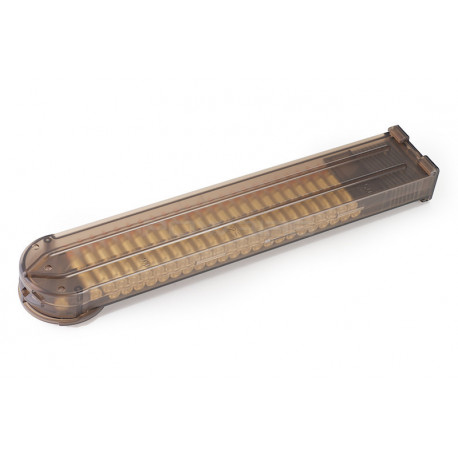 A beautiful magazine with fake dummy rounds showing through the transparent casing that looks just like the real thing.

Tokyo Marui Co. Ltd is an airsoft gun and toy cars manufacturer located in Adachi, Tokyo, Japan that produced the AEG. The guns are principally sold in Japan, but are also sold worldwide. They were the first company to produce airsoft guns powered solely by electric-motor driven air compressors, which they called "Automatic Electric Gun" (AEG) in 1992. This compact air compressing system was implemented in their first battery-powered automatic firing replica, the FAMAS F1. Other airsoft guns were then introduced. The AEG system is still in use, and has been copied numerous times through the years by many other airsoft gun manufacturers. Marui is among others the inventor of the AEG and the Hop-Up system.

See all products from Tokyo Marui