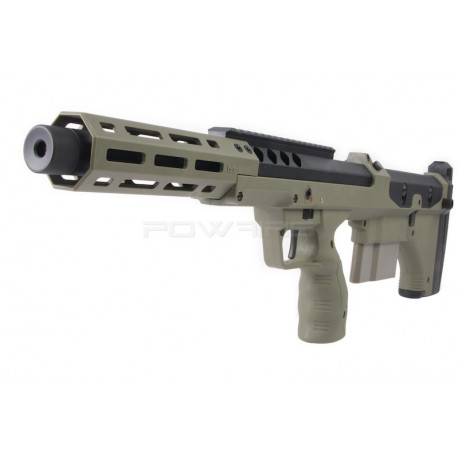 The Desert Tech SRS is an outstanding bullpup sniper rifle that has made waves both in the real steel world and in airsoft by their licensed manufacturer Silverback. The M2 denotation refers to their monolithic receiver.

The SRS monolithic receiver, made from aeronautical grade aluminum, by CNC, features the new patented barrel Mount by Desert Tech, which more uniformly clamps onto the barrel and reduces peak stress points. The SRS-A2 receivers are highly lightened (25% lighter than previous A1 models), participating actively in the mass reduction. Each receiver has a unique engraved serial number. The handguard is using M-LOK and includes QD points for the fast attachment of accessories and slings. In addition to this, the SRS A2 receiver features a stainless-steel attachment point for tripods (1/4-20 UNC threaded). For those that are interested, you can also mount the Desert Tech monopod to the stock as well. Threading on suppressors have never been easier. The rifle comes standard with 14mm CCW threads but is also compatible with the Silverback DTSS QD suppressor that can be directly threaded over the 24mm CW threads found on the muzzle brake.

Internally, the SRS is a class leader when it comes to air displacement. The cylinder holds up to 41cc of air which is only second to its bigger brother the HTI. Being an awarding winning system, you can upgrade it with a variety of spring APS 13mm options. Combing this with its buttery smooth action, 6.05 tight bore inner barrel, and adjustable trigger box, the SRS A2 is a marksman's dream rifle. To ensure the most flexibility, the SRS A2s come standard with a fast hop-up adjusting system that is compatible with standard AEG hop-up rubbers or you can always opt to use the first-party rubbers directly from Silverback.

Looking at this, you are getting a rifle with great value with only a few differences from the standard version of the SRS. The Sport version features a polymer MLOK handguard instead of aluminum. It also lacks the long follower capability and it's not compatible with the thrust bearing spring guide.

Due to import procedures, the boxes of Silverback box replicas must be opened to slip legal documents of French Airsoft legislation before being  shipped to us. The replica is therefore delivered with the original seal box of the manufacturer already opened.

Established in 2008 by airsoft addicts and serious wargamers in Hong Kong, our goal is to better serve our fellow mates in this unique sport with the most innovative and high quality products that one will require in any airsoft fields situation.

See all products from Silverback