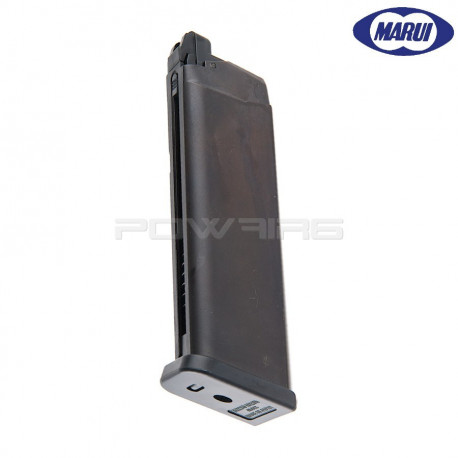 Out of stock - No date of restock

Despite everything you can read on the internet and on on the manufacturer's manual, we recommend that you never introduce silicone or grease into airsoft magazines. Greasing has a devastating effect on a replica since it will directly grease the hop-up rubber and inner barrel, resulting in a loss of precision and even more accentuated dust fixing. Never introduce chemical products such as grease, silicone spray or any other kind into the magazine, the hop-up unit, the BBs, the internal parts of the AEGs. The silicone is only used on pneumatic parts such as a gearbox cylinder or a moving O-ring. Special recommandation regarding Mid-cap Magazine :

Tokyo Marui Co. Ltd is an airsoft gun and toy cars manufacturer located in Adachi, Tokyo, Japan that produced the AEG. The guns are principally sold in Japan, but are also sold worldwide. They were the first company to produce airsoft guns powered solely by electric-motor driven air compressors, which they called "Automatic Electric Gun" (AEG) in 1992. This compact air compressing system was implemented in their first battery-powered automatic firing replica, the FAMAS F1. Other airsoft guns were then introduced. The AEG system is still in use, and has been copied numerous times through the years by many other airsoft gun manufacturers. Marui is among others the inventor of the AEG and the Hop-Up system.

See all products from Tokyo Marui

yes it is compatible.